launched September 2019.
We would love to have some feed-back and please share. 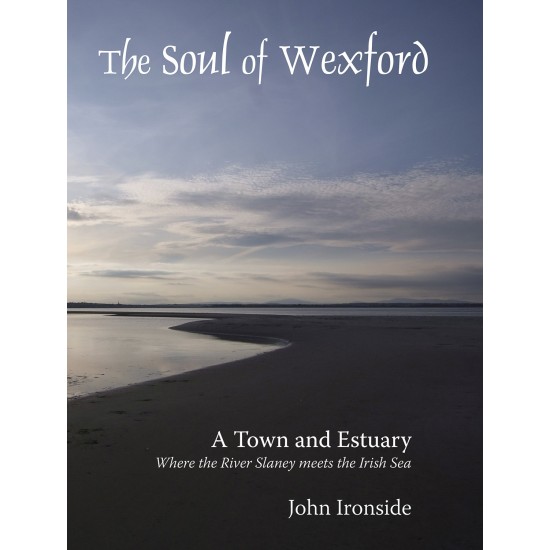 The Soul of Wexford:

a town and estuary where the River Slaney meets the

Church interiors and town and Harbour scenes and artifacts that had not been captured before are presented  among 200 original images in a new 148 page coffee table hardback book titled The Soul of Wexford by specialist photographer John Ironside.

The book is subtitled Where the River Slaney meets the , putting Wexford town  (Population 19,000) of Viking and Norman notoriety  in a geographical and historical context at the point where the Slaney estuary meets the turbulent waters of Wexford bay.

Among the images that have excited historians are  rare images captured at low tide of the remains of an old fort village at Rosslare point which was there until 1925 and 1926 when it was flattened by storms and its Duggan, Walsh and Wickham families had to leave for  new homes in the Harbour a mile away. Historian Nicky Furlong said that the village once had a majestic house designed by the Anglo Irish explorer, Sir Henry Hughes of Ballytrent.

Double-page and major full page spreads in the book feature breathtaking images of dawn and sunset over Wexford Harbour, seagulls in the Harbour, ragworm casts, a unique photograph of a gathering storm over Wexford and another of a close-up of the historic Friary bell.

The beautiful cloister and the ceiling and altar of the church in St. Peter’s College seminary, designed by Augustin Pugin,  are  among the prominent images in the book.

The author, John Ironside, majors on his loves of church architecture and the environment of the town and estuary. He is a Fellow of the Royal Geographical Society and he has worked on photographic assignments in , the Amazon, and Southern Africa and North Africa and in the emerging countries of . On his various returns to Wexford he observed that the town had changed, and that much of it had gone forever. He felt that the town and its important artifacts should be captured at this point in time not alone to promote and illustrate the beauty of where the townspeople live but also to awaken them to the wonderful assets that they have on their doorstep.

Based on 0 reviews. - Write a review
€40.01
Ex Tax: €35.25
Add to Cart
Buy Now Question
Add to Wish List Compare this Product
Tags: SOW Book
We use cookies and other similar technologies to improve your browsing experience and the functionality of our site. Privacy Policy.